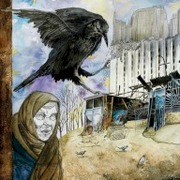 Blackbird Raum formed out of the nucleus of a squatter community living in abandoned buildings and greenbelt treehouses in Santa Cruz, CA, in the early 2000's. Finding themselves living without electricity, they began to learn to play folk instruments from each other and other members of the traveling punk/folk culture. They all grew up playing in anarcho-punk, indie and ska bands and then, knowing next to nothing about traditional music, slowly gathered together the skills to create a new genre of music, based somewhere right in the middle of punk and folk.

Refusing the retro cliches of many of their contemporaries, they write entirely original music (in both senses of the word) that is reflective of the world they live in: a realm of abusive police, ecological devastation, creeping ambiguity and vague fear, but also a strong sense of community and a deep love of a natural world constantly on the verge of collapse. They toured the country in a tiny truck, playing mainstream folk festivals, punk houses, squats and all ages clubs. When they aren't touring, they play various American and European traditional music, hang out in the woods, raise children and read a lot of library books. Swidden is our first album to be recorded in a real studio, and is the product of many years of playing music on dirty street corners and punk houses across the country.

This album has tracks that date back to the very beginning of Raum, and many songs that we play regularly today.