This book is a revised and enlarged edition of 'Linear Algebraic Groups', published by W.A. Benjamin in 1969. The text of the first edition has been corrected and revised. Accordingly, this book presents foundational material on algebraic groups, Lie algebras, transformation spaces, and quotient spaces. After establishing these basic topics, the text then turns to solvable groups, general properties of linear algebraic groups and Chevally's structure theory of reductive groups over algebraically closed groundfields.

In the theory of algebraic groups, a Borel subgroup of an algebraic group G is a maximal Zariski closed and connected solvable algebraic. Linear Algebraic Groups.

The remainder of the book is devoted to rationality questions over non-algebraically closed fields. This second edition has been expanded to include material on central isogenies and the structure of the group of rational points of an isotropic reductive group. The main prerequisite is some familiarity with algebraic geometry. The main notions and results needed are summarized in a chapter with references and brief proofs. 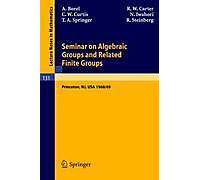