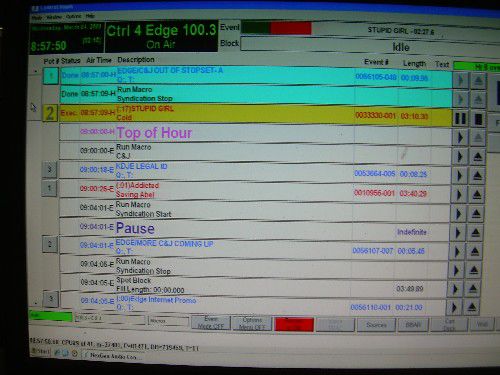 The original Selector was developed on a PDP-11/03 under and was programmed in Fortran and FMS-11. The goal of Selector is to help music directors of to handle day-to-day operations such as daily schedule generation, maintenance of and format hours (also known as clocks). As of 2013 RCS has approximately 14,500 clients worldwide. Linker RCS also provides a scheduling system for non-musical elements (, promos, etc.) called Linker, a digital automation system for broadcasting from PC called Master Control, a commercial (spot) trafficking system known as Airwaves and software for radio newsrooms called RCS News. GSelector In April 2006, RCS introduced new music scheduling software for radio, satellite, DAB, HD and internet stations called GSelector. The original Selector system used Rules to determine what songs can be scheduled at given schedule positions: do not play two rock songs in a row (Sound Code rule); do not play a song in less than 2 hours (Artist Separation rule); do not play certain songs in the morning (Daypart Restriction rule) and many more.

In GSelector, music director sets goals (hence the GSelector name) of what should happen; instead of rules the system provides a set of controls allowing to easily adjust (increase/decrease) balance and demand of a variety of music attributes: tempo, energy, mood, artist occurrence, etc. Apart from goal-based scheduling GSelector also offers a new approach to music libraries. Unlike the previous system which maintains one library per database (whereas database usually refers to a single station), GSelector allows the operation of individual stations (with individual schedules) that share one music library within a single database. Studio automation software NexGen NexGen is a digital automation system originally developed by Prophet Systems, Inc. Prophet Systems was founded in 1989 by Ray & Kevin Lockhart of to develop a system that would run their radio stations.

Prophet Systems went on to become a subsidiary of Capstar Broadcasting Partners (which eventually became ) in 1998. On January 19, 2007, Prophet Systems and RCS merged. NexGen allows for, remote control, and complete station automation; as well as dual redundancy, an emergency control room system, and satellite control. Alongside many other media organizations, uses Nexgen to manage some of its programming. Introduced in 2011, RCS Remote for NexGen is the latest application in the RCS/NexGen platform of products.

RCS Remote for NexGen is the first application developed by RCS for the iOS platform to allow for remote control of a station in a NexGen system. The application is designed for the iPhone, iPod Touch, iPad, and iPad2.

Zetta is used in a variety of different countries, including France, Germany, Greece, Italy, UK, Jordan, China, Taiwan, South Africa, Poland, Singapore, South Korea, India, Japan, Sweden, Australia and the United States. Traffic system software Aquira Aquira is a scalable platform that centrally supports single station to multi-station or multi-location broadcast groups. The database allows the user to manage scheduling and billing of advertising orders across multiple stations from one location. The log management tool allows the user to open multiple logs at the same time and drag and drop spots from one day to the other. News production RCS News RCS News is a radio newsroom system.

The software was first released by Prophet Systems in 2004 as NewsGen. After the merge with RCS, the product was officially renamed to RCS News.

Since that time, RCS News has become common in newsrooms around the world. RCS News allows for a transition for file transfers to NexGen, Zetta, and Master Control. One of the features of RCS News is the robustness of the wire copy process, where sources such as HTTP, FTP, RSS, and Email are supported. New media RCS iPush RCS iPush is the first application developed by RCS for the iOS platform. The application provides for audio recording with the unique ability to send the audio to NexGen, Zetta, or RCS News. Many users have found iPush to be useful for recording voicetracks.